“I’d say products are moving 30 percent quicker through the shop because of Production Coach’s ability to organize our part production.." 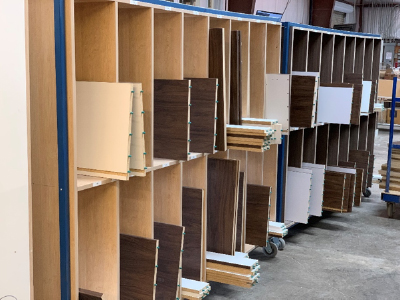 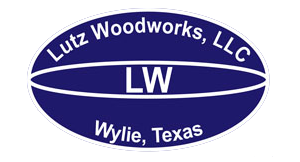 Within the first couple of weeks of implementing Production Coach and using its Smart labeling system, Greg Lutz, president of Lutz Woodworks, says he saw noticeable gains in operational efficiency from component manufacturing and assembly through shipping and job-site installation. Those improvements became even more pronounced in the weeks and months that followed.

“I’d say products are moving 30 percent quicker through the shop because of Production Coach’s ability to organize our part production,” Lutz says. “We actually have one less employee in the shop than when we implemented Production Coach. After he left, we did not replace him and we’re still building quicker.”

Lutz is an active member of the Architectural Woodwork Institute (AWI). In addition to being the reigning president of the Texas Chapter of AWI, he served several years on the national AWI Board of Directors, including as president in 2016.

During a Texas Chapter meeting dinner last year, Lutz broke bread and talked shop with Roger Shaw of RSA. Asked by Shaw to identify his biggest production pain, Lutz pointed to the tedious and time-consuming task of sifting through stacks of parts to locate all of the ones needed to assemble a cabinet

“Roger told me about Production Coach and how it could solve our sorting problems and improve our flow,” Lutz recalls. “We met again later to discuss Production Coach in more detail. He showed me how one software that’s very user friendly can manage all of our product operations with the software we’re already using.” 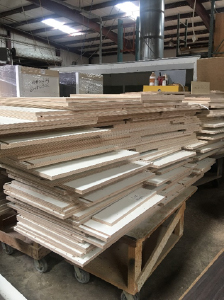 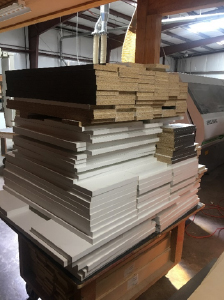 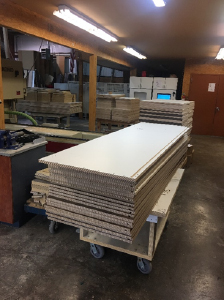 Before Production Coach parts were flat stacked mostly by part function. Then these parts would be sorted via reading the labels which tells what box they belong to. However my team knew what part they were looking for so they would select any part that matched what they needed. Hencee the integrity of the labels per part became flawed. Often parts from for two articles would be used in obe article. Hence when it came to labeling and shipping the accuacy would depend on what label was selected to ID the box. 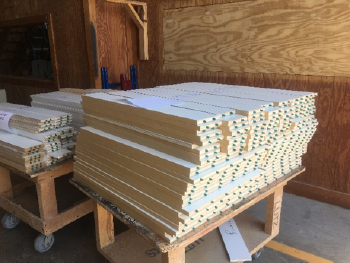 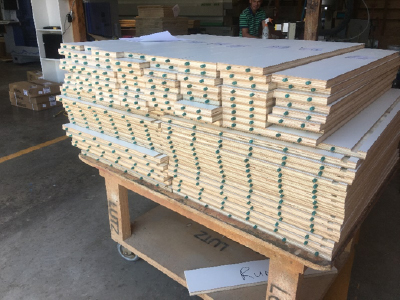 Even with good labeling we deployed the marker method to reflect what the label stated on the part on the edge. This enabled us to sort with less movement of parts. 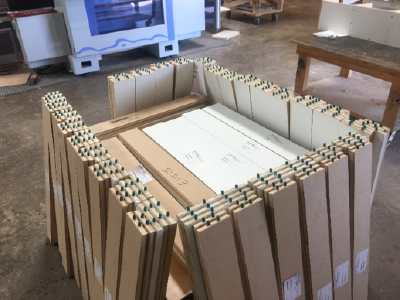 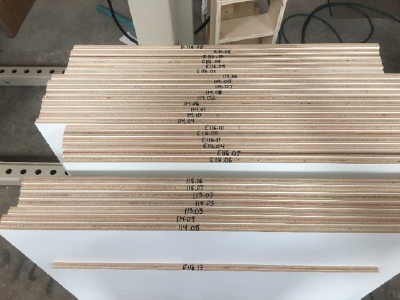 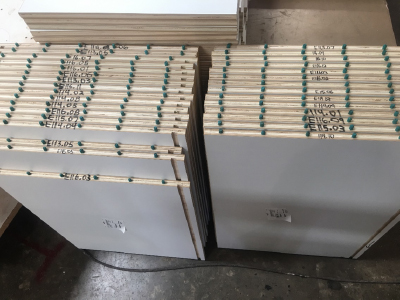 The amount of time and space to manage the parts was taking many movements of the parts and was error prone because you could short cut the system by saving “Search Time” simply by selectig a part that was not assigned to the box/elevation but assembled fine.

“The hand off of data from Microvellum to Production Coach is extremely easy and seamless,” Lutz says. “We might have seven parts for one cabinet and the next cabinet has nine parts. Production Coach knows how many upper and lower cabinets are in each job and which parts are required for each cabinet because its in-synch with our CAD/CAM software on the front end. From the data dump, Production Coach knows exactly the dimensions of each cabinet part, which edges get banded and with what color, and where holes need to be drilled and dowels inserted.”

Production Coach captures that and other pertinent production information in a Smart bar code label that is printed and affixed to each part after it is either cut-to-size on an SCM panel saw or nested on a Komo CNC router.

“The labeled parts are laid flat and stacked like a ream of paper on a cart,” Lutz says. “Then the cart is rolled over to our Biesse edgebander. The operator scans the label and a schematic of the part is displayed on a 42-inch monitor (one of eight positioned throughout the plant). He can see which edges need to be banded and what color of edgebanding is required for that part.”

Next, the stacks of edgebanded parts are moved to a Biesse drill and dowel insertion machine. The operator scans a part’s bar code, which automatically configures the required drill pattern, including placement of dowels. Once again, each part is stacked one on top of the other.

Up to this stage, Lutz says it doesn’t matter which part belongs to which cabinet. But that soon becomes a critical factor when the stacks of fully machined parts are carted to the assembly department. This is where Production Coach, in conjunction with double-decked carts built by Lutz Woodworks, creates order from chaos. The carts have two rows of eight vertical bins, each designated to hold all of the wood components required to construct a specific cabinet.

“Before we implemented Production Coach, our guys had to sort through all of the left sides, right sides, bottoms and tops that were all stacked like a shuffled deck of cards.” Lutz says. “It would take someone a long time to go through the stacks and find all of the parts needed to assemble a cabinet. 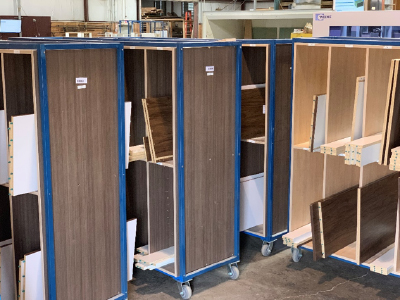 Using Production Coach we reduced the sorting labor requiremeents by over 70%. No markers. No miss used parts. And our team set up a quality control system that captures damaged parts and gets them fixed before any article is started in assembly. Each part is scanned and the monitor shows what slot the part is assigned to. We can dazzy chain the rolling slot fixtures and Production Coach manages where every fixture and slot is in the production process. 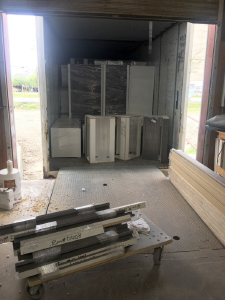 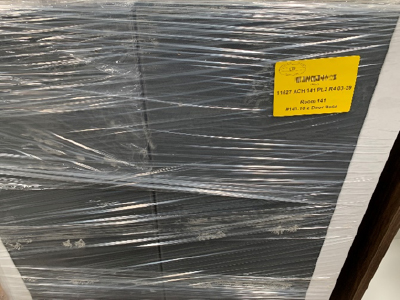 Shipping correctly with no leave behinds was a challenge. We now have 100% accuracy and Production Coach generates shipping reports as well as delivery reports that are time stamped. We no longer have lengthy discussions at the job site focused on what we said was delivered and what they say was delivered. We no longer build (FREE) boxes that simply get lost at the construction site. We have proof of when the products were delivered and we can track installation. We are taking advantage of GPS system that enable us to be aware of the location of our trucks. This data is archived

We double label our articles. One on the box back and one on the shrink wrap. This way we do not need to scan through the wrap and the article does not loose its identity of where its final resting point will be.

The system will not let you place a box that is not supposed to be included in a loading work order. Also it tacks exactly what is on the trailer and what is needed to complete the WO or back ordered. This data can be linked to accounting systems to expedite the accounts recievable process.

ROI: I do not know exactly when the system paid for itself but I know that after 7 months I got my full investment back and am looking for more technology to deploy with Production Coach. Our next process will be the google calendar scheduling system that automatically loads my work cells.

We also have graphical presentations of one offs where the craftsmen can scan the part and see exactly where that part is to be used in the assembly. The same screen shows all of the parts list and hardware requirements. Those costly trips from the production floor to engineering have been reduced to almost zero and my shop is very close to paperless.

“Now we go through a cart of stacked parts as fast as we can scan and transfer them to the vertical bins. The first part he scans might be for cart 1, bin 7, followed by cart 1, bin 9 and so on. If the cart isn’t big enough to hold all of the cabinets for the job, Production Coach knows we need more carts and tells us which carts are empty and available. When all of the pieces for a cabinet have been put in their slot, that bin turns green on the monitor. When all of the bins turn green, we know we have all of the parts for the job.”

An assembler removes all of the parts from a bin, constructs the cabinet and places it in a case clamp. “When it comes out of the case clamp, he scans any label on that box and it does two things. First, it clears that bin in the cart because it knows those parts have been assembled. When all of the slots have been cleared, Production Coach knows that cart is empty and ready to be used again. Second, it prints a new label for the assembled cabinet that has the job name and number.

Before implementing Production Coach, an employee would have to physically check off each cabinet on a notepad that typically numbered multiple pages before it was loaded onto a truck for delivery to the jobsite. “We might have five different runs of cabinets being loaded into a semi-trailer. Instead of a guy with a checklist, we now have a guy with a scanner. As a cabinet is rolled to the truck, he scans the bar code and Production Coach knows that particular cabinet was loaded on this truck on this day and time. It’s not only a tremendous time-saver, but it also is very accurate and eliminates the chance for human error.”

When the cabinets reach the jobsite, the bar codes are scanned to verify their arrival.

At the International Woodworking in Atlanta last August, RSA Solutions won a Challengers Award for Production Coach. The award recognized the software as an innovative technology that will advance the industry.

“I bought the software right before IWF last year. When I heard that RSA won the Challengers Award, it made me very excited and confirmed why I bought Production Coach. I was super proud to know that my gut was right.”

“Roger Shaw and his group made it easy to be a customer,” Lutz adds. “From the initial low-pressure dinner where we discussed Production Coach through our on-location training. He let us kind of set the bar on the pace we wanted to move at, but they were there. At the end of the day, I would have to say that Production Coach was probably the quickest and easiest software that I have ever attempted to implement.”

Production Coach gets its data dump from Microvellum. “The process from Microvellum to Production Coach is extremely easy. As we move to the beam saw and the nested router to start our cutting process, we do real-time label printing as the parts are cut. We use the bar code label so we know how to edgeband the part, how the bores are done, etc.” 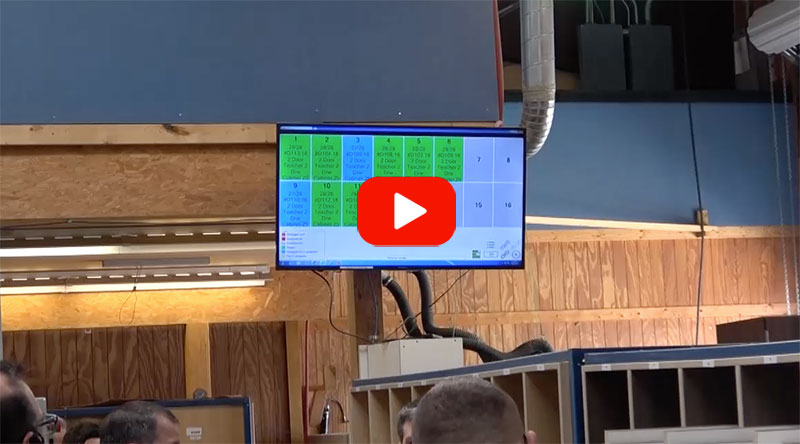